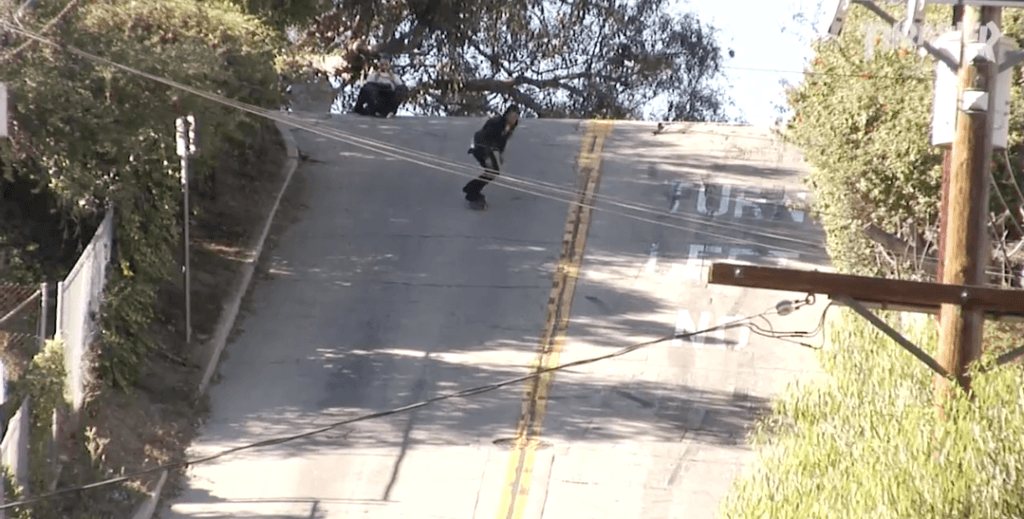 Nuge bombing the fifth steepest street in America
Bomb hills not countries! Thats a phrase I remember hearing or seeing somewhere at some point in time on some skate related product and I always thought it was awesome. By now many of you should have seen Don the “Nuge” Nguyen recent hill bombed the fifth steepest street hills in America. The hill is in Los Angeles. If you have not I will provide the link below. For those unaware “Nuge” is also the first person to ollie the El Toro 20 stair so he’s no stranger to setting gnarly standards.

How to Bomb a Hill
Bombing a hill is no joke and it can be straight up devastating or even life threatening if things were to go wrong. Whether it be getting speed wobbles on the way down and slamming or worse getting hit by a car at an intersection because you can’t even see them coming nor are they looking out for you. It is a dangerous balance of disaster to juggle with and all while going so fast that worrying about staying on the board is the primary objective and everything else that’s to come in front of you becomes secondary whilst the few milliseconds of adrenaline and focus.

Top 6 Gnarliest Hill Bombs
Below are not the top six hill bombs of all time but more like 5 notable hill bombs that come right to mind for me.
What is your definitive favorite greatest hill bomb of all time to watch? Who holds that title in your eyes? Also bombing hills is super dangerous and in no way are we trying to amp you up to ride down anything like these dudes. You can straight up just live vicariously through watching these speed demons fly by your screen at 40 miles per hour. They are professionals and have had their fair share of years of experience skateboarding in general before they even attempted any of this. Also on a side note I won’t be counting longboard hill bombs these are pure gnarly true skateboard hill bombs! Essentially boards that are not meant to go down something that fast!

6. Anonymous, Massive Cement Hill
Okay this first hill bomb left me wondering where the heck this spot is? Its a trip to be honest with you I mean this is a massive cement hill I’m not even sure what it is completely but it must have been an absolute pain pouring that much asphalt or cement into the ground to create it. This dude nearly disappears on screen the size of an ant and truly shows the sheer mass of this hill. I won’t spoil the end but some of you might be able to guess it. Either way props to him for sticking with it. And if anyone knows where this is in the world let us know!

5. Thrasher, Need for Speed, Richard Bowen (1:35)
This next video is a full montage via Thrasher. They had an actual hill bomb contest and these were individuals that submitted there quite a few in the video but my personal favorite is Richard Bowen at 1:35 of the video because of the near catastrophic fall you think he’s about to have its so gnarly how he recovers at the last millisecond!

4. Next is Jon Allie in the New Blood video!
Now in the video this might not look as gnarly as you’d expect but B Street in Downtown San Diego is gnarly believe me! And bombing it switch is no walk in the park its absolutely mind boggling. This hill has so many potholes and giant cracks throughout its downhill descent that you could be deterred from trying it just walking up it seeing what your going to have to deal with on the way down.

3. Frank Gerwer is a San Fransisco skateboarding legend!
He has always been one of my favorites to watch skate and this hill bomb is epic! I absolutely love his reaction at the end of his hill bomb because the first time I watched it I swear I said the exact same words in synchronization with him as he said them it gave me goosebumps “holy shit”

2. Emmanuel Guzman
Wow is all I can say on this next video! Emmanuel Guzman is a beast he tackled this hill like a champ you can see the sheer and viscous speed that he battles through blazing by the camera its absolutely mind blowing. Its the kind of speed that you would need a windshield to deter insects dying on impact upon your flesh its THAT fast. I could only imagine. Prepare to watch it a couple of times.